On 30 and 31 July I joined my friend Keith for the first wargame in his newly adapted stable block down in Devon. He had put together the fight for Matthews Hill, the curtain raiser for the First Battle of Bull Run in 1861. We had previously played this scenario round at mine and had found it a balanced and exciting game. It didn't disappoint this time either. In fact, we so enjoyed it this time that when the game ended we set it up and played it again.

What Happened on the Day

First Bull Run began with an attempt by the Union Army to outflank the left of the Confederate army. Fortunately for the Confederates, Colonel Evans, the officer commanding a brigade on their extreme left, was alerted to the Union movement and set off with the bulk of his command to block their advance. When he arrived at Buck Hill, he saw the head of the Union column emerging from woods by Matthews Hill. Evans immediately launched an assault on the Union troops, in an attempt to buy time for more Confederate troops to change front to meet the Union advance. Reinforcements did arrive and the Federals were held up for some time, but at around 1130, the Confederates withdrew to Henry Hill, where the next phase of the battle played out. Evans' command had achieved its objective but paid dearly for its tenacious stand. 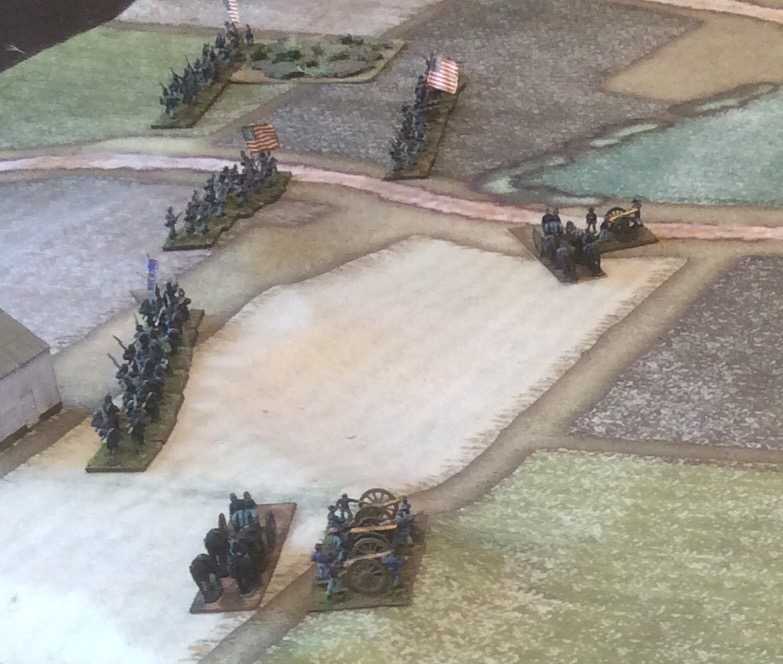 Burnside deploys on Matthews Hill. The furthest two regiments will assault Buck Hill from the flank.

See the Orders of battle , map and instructions to the commanders here. When the scenario begins Evans is on Buck Hill with two regiments and a small battery, while across the valley Burnside's Union brigade is in column, emerging from the woods with a mass of troops marching on behind. The Confederate may roll for reinforcements during the game but the Union reinforcements just keep following their noses. The disparity of numbers is quite large in favour of the Federals but the Confederates don't need to break them: they just need to buy time so that the rest of their army can change front. In Longstreet game terms, therefore, the Federals are out to break Confederate morale while the Confederates hope the Federals will run out of cards before that moment arrives.

The table cloth is a generic mat by Cigar Box Battles, with polystyrene hills underneath. We ignored features drawn on the mat that were not relevant to the scenario. Buildings are by Timecast. Figures are mostly 15mm Peter Pig, supplemented by some Freikorps. All painted and based by Keith. Cider from the Nogg Inn in Wincanton.

How it played out

In the first game we played, the Confederates held back on Buck Hill and strengthened the position as reinforcements arrived. The Union meanwhile deployed from their columns and extended both flanks, with the main assault being against the Confederate right. By allowing the Federals to deploy their superior numbers, the Confederates gave up some initiative and were hammered by heavy firepower. However, the Union side ran dangerously low on action cards and broke the enemy with just three cards left. A very close and enjoyable game.

Both commanders thought hard about the lessons from game one and game two played quite differently. The Confederates came out fighting, assaulting the Federals on Matthews Hill and generally cramping their room to deploy. Evans was effectively destroyed in the process, but the Confederate reinforcements coming up behind were able not only to form a solid defence on Buck Hill, but also to try a manoeuvre to nip off and destroy the Federal left. This very nearly worked and certainly slowed up the Union side some more. Casualties in game two were more even than in the first game and again, the result was in doubt right to the end. However the Federals were able once again to break Seccesionist morale, this time with just four cards left in hand. 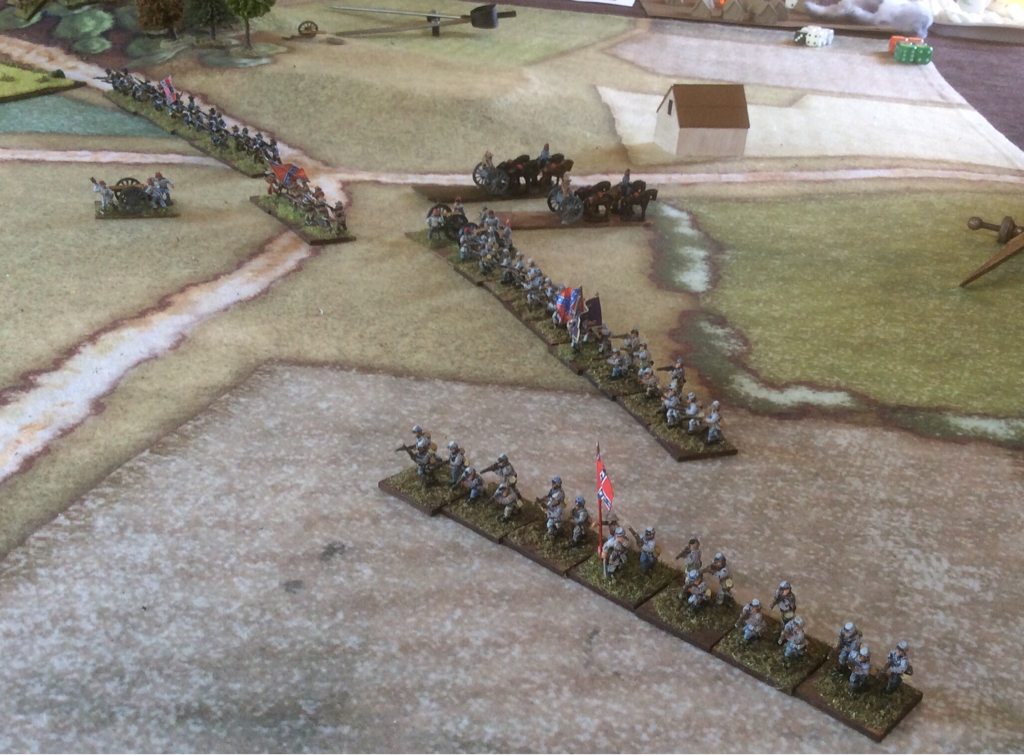 The Confederate left forms up. Stone House is behind them.

Federal troops advance on Wooded Buck Hill in the distance. Somerset cider in the background.

We have played over two dozen games of Longstreet so far and it has become my favourite rules set, not just for ACW but out of all the periods we are playing these days. It was fun from game one but playing it has got richer as we came to know the rules and the action cards better. In this scenario, set in 1861, the two sides need to play their action cards very differently. The Confederates have an advantage in deck size, which gives them more options than the Union, not just from special cards like Rebel Yell, but also from being able to apply more modifying cards in a turn compared to the Union. In one turn, the active player might use up to four action cards (fire phase plus modifying card, then move or charge phase plus modifying card). The passive player meanwhile might use one interrupt card and up to the rest of their hand in removing hits from fire and melee. A player can burn their deck very quickly indeed if they use every opportunity to play a card for one purpose or another. But in an 1861 scenario, the Federal needs to ration card use in order not to run out before the enemy does. The Secessionist on the other hand can be more generous with their cards since they start with a bigger deck. The effect on the game is satisfying: the Confederate side tends to be more nimble and aggressive in play, whereas the Federals are more cumbersome. For an Eastern Theatre game, at least, this makes sense.

Another aspect of the rules that took a few games to work out is that it really pays to coordinate your brigade so that as many units as possible take the same action together. For example, if you only fire one or two units in a phase, the passive player has a chance to reduce the effect of that fire by playing action cards from their hand. If, however, several units fire in the same phase, there is a good chance that the number of hits inflicted will swamp the passive player's hand so more hits get through. Obvious to some perhaps but it took me a while to see it!

Having played Longstreet so many times now, it strikes me again how useful it is to play new rules several times exactly as written, before contemplating adding House rules. It makes sense to benefit from all the play testing that went into them before publication, and as often as not, their subtleties will only reveal themselves over a few games.

If you don't know these rules but are tempted to try them, there is a free downloadable set called Longstreet Light, available from the Honour website. Chances are you will want to progress to the full set pretty quickly but the free PDF gives a very good feel for the system. 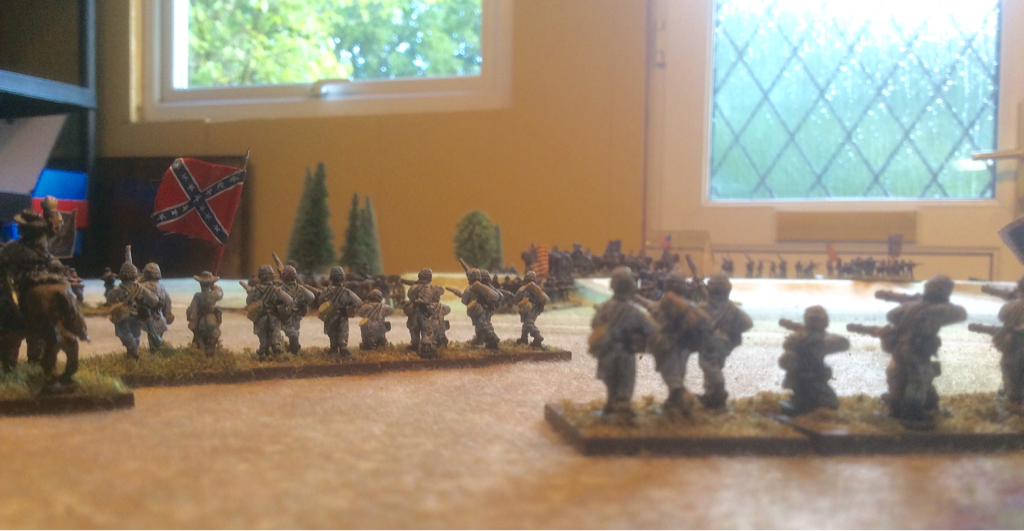