Ancients were my first serious Wargames project back in 1981, using the excellent Hoplite Warfare. I started with 25mm plastic Rospaks, moving quickly to metal Minifigs, bought from Seagull Models behind Victoria Station in London. I only played with them for about 2 years, before moving to Minifigs 15mm Carthaginians and Republican Romans. We had a long and happy period playing Tabletop Games' Shock of Impact. The 25s came back into service when DBA was released and were popular for a while, before resting again. Their next reincarnation was with Sword and Spear, the most entertaining Ancients set I have played in years. I greatly enjoyed rehabilitating the old figures and supplementing them with new troops from First Corps.

In 2018 I gave all my 15mm Ancients to Keith in exchange for his 25s. It seemed silly to continue with two scales and with the swap, we now have enough choice in our collections to field two sides.

We played a Sword and Spear game based on Chaeronea on 13 April. Armies were 500 points a side. The Greeks faced North, with a river along their right flank and hills on the left. We classified a couple of low hills closest to the valley as rough and the rest as difficult. The Macedonians had 11 units and Greeks 14. See the attached army list. 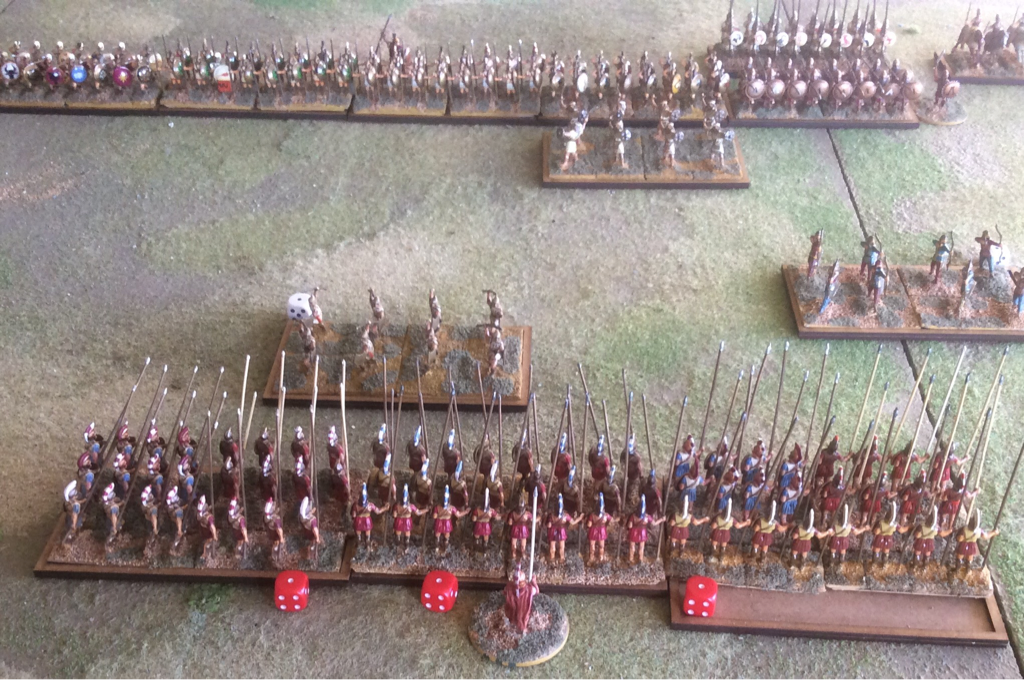 The two centres close to contact
Both armies deployed more or less as in accounts of the battle: the Greek right was held by elite hoplites representing the Sacred Band, with undrilled Allied Hoplites in the centre and better quality Athenians on the left. Greek light troops occupied the hills and some poor quality cavalry were behind the centre. 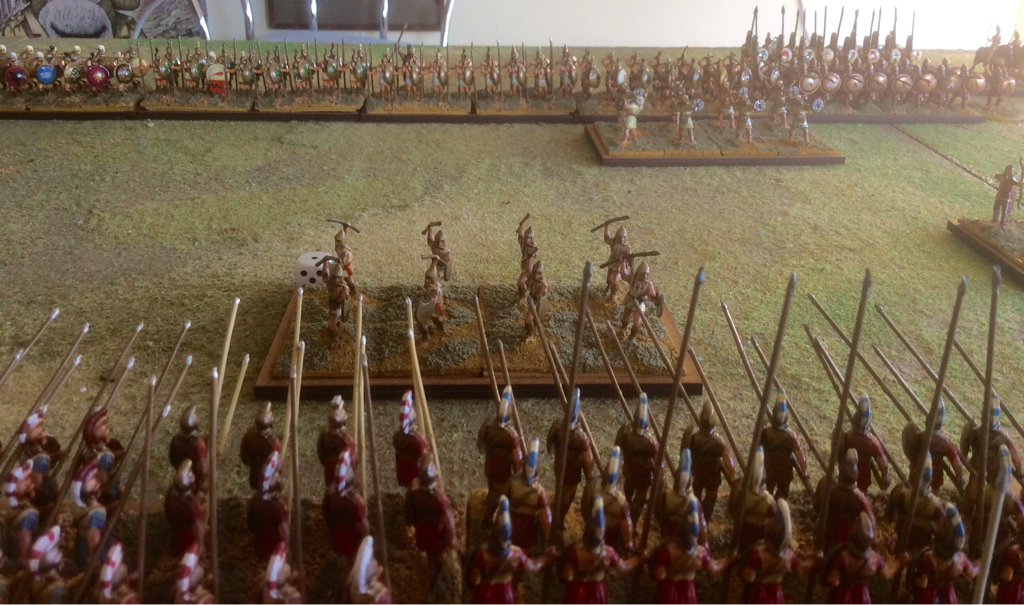 Philip of Macedon led the phalanx in the centre, with Hypaspists on the left linking the infantry to Alexander with a unit of Companions followed by allied Thessalian horse. (We use the classification of Hypaspists as Spear armed, so a bit more versatile than pikes.) He had Thracians and light horse in the foothills on the right 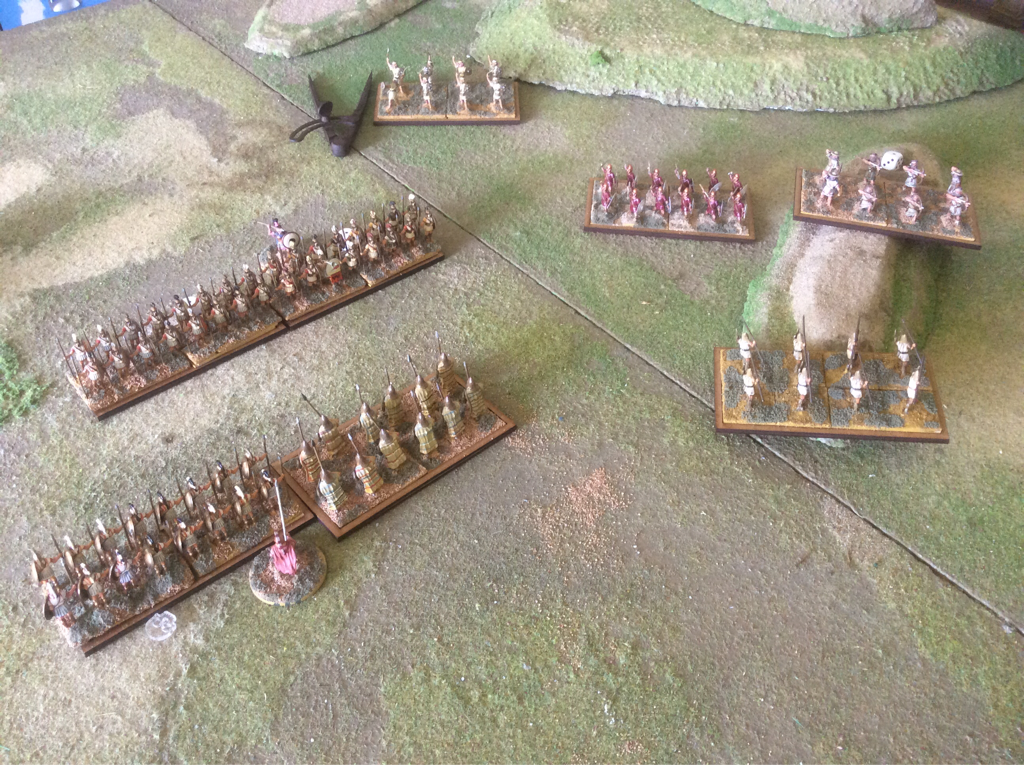 The Macedonian Right recoils before the Greek Left
The battle began with early Greek successes in the hills, with peltasts and Cretan Archers starting to curl around the Macedonian right. But on the flat ground, Philip put all his effort into prising the Greeks away from the river. He reacted to the success of the Greek left by refusing his right hand phalanx, but ploughed on with his own centre and left. Alexander led the Companions and Hypaspists to victory against the Sacred Band along the river bank and from then on the outcome was not in doubt. The Macedonian horse brushed aside the enemy cavalry behind the Greek line and slammed into the rear of the hoplites in the Greek centre, who were already under pressure from Philip's pikemen. In one turn, the Greeks passed both the 1/3 and 1/2 morale points, for an emphatic Macedonian victory. 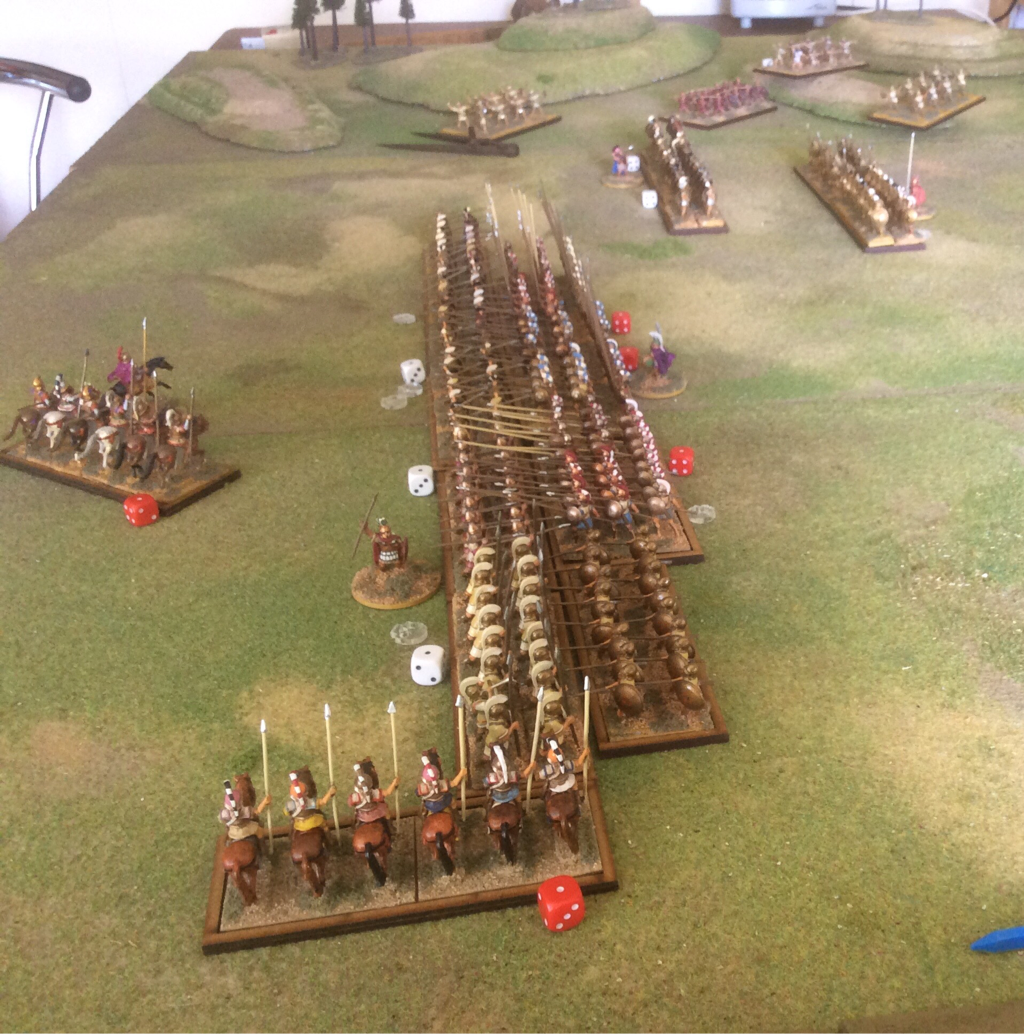 The Macedonian Left turns the Greek flank after defeating the Sacred Band
It was a great game that we agreed had been closer than the result suggests. Had the Greeks held back in the centre and right for a little longer, their success on their left could have caused problems for Philip. Also as Greek commander I fluffed my handling on the right: I allowed myself to break my front line which let Alexander hit the Sacred Band with both Hypaspists and Companions.
Figures are a mixture of 25mm plastic Rospaks and metal Minifigs. The collection began in 1981 and has been added to in the past few years after a long period of neglect.