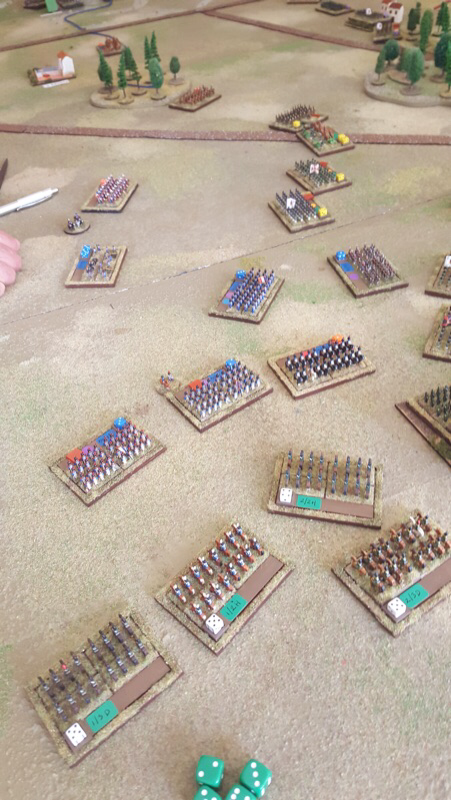 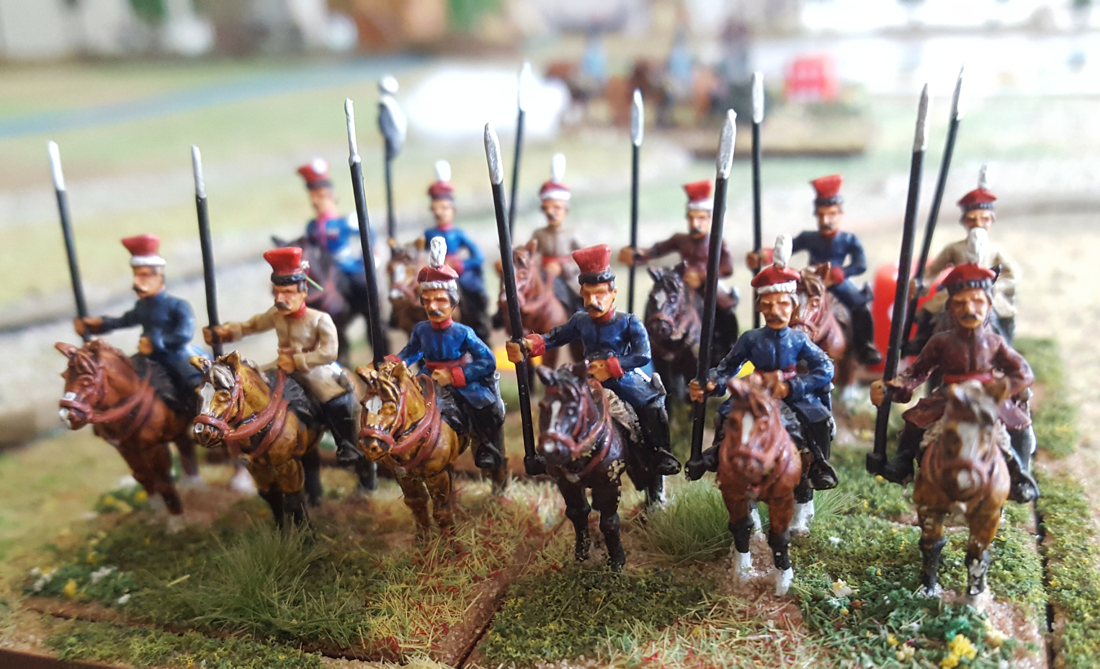 The two Napoleonic rule sets we play regularly are Blucher for Corps, and Lasalle for Division level games. I have most recently bought Absolute Emperor for really big battles. The latest rules on the block are Soldiers of Napoleon, another Division level game. I prefer a historical scenario where possible and have uploaded a small selection below from 1809, 1813, 1814 and 1815.

Scenarios for Soldiers of Napoleon

Soldiers of Napoleon was published in Spring 2022 by Warwick Kinrade, author of the WW2 rules Battlegroup which I particularly enjoy (he was also associated with the excellent Epic 40k rules in another lifetime!). These are a division level game, using cards to moderate events. So far, I am really enjoying them.

Scales for Soldiers of Napoleon

The SoN rulebook doesn’t provide a ground scale or figure-to-model ratios. Instead it uses a notional ‘pace’ and leaves it to the players to decide how long that should be, depending on existing figure collections and basing conventions. This should save a lot of re-basing and I’m sure more people will try the rules because they won’t need to overhaul their armies. I’m less sure that somebody wanting to start their first Napoleonic collection with these rules will know where to start!

Our own approach is as follows:

The following information isn’t necessary to play a game but we use it when writing scenarios based on historical actions:

After reading some positive reviews, I picked up Osprey’s new Napoleonic rules, Absolute Emperor by Boyd Bruce. I plan to use these for the big battles where even Blücher groans under the weight of units. The basic manoeuvre element is a division and the mechanics are straightforward. Like some other Osprey rules I’ve read, the rules could have been better edited and some information is hard to track down. But for a tenner, I’m not going to quibble. The book includes the author’s explanations behind his design decisions and he concludes by encouraging players to adapt and amend the rules as they see fit. That’s a refreshing position to encounter! He is also active on the AE Facebook page, answering questions promptly and generally encouraging players to get involved.

This scenario was written to introduce new players at the club to the Absolute Emperor rules. It worked well with two players a side. Experienced players would easily manage it one-to-one.

This scenario covers the French attempt to break the Coalition centre south of Leipzig on the afternoon of 16 October 1813. It is a big game, suitable for multi-player. In our game, we had 4 French and 3 Coalition players. See the report of our game on my blog here

This scenario is smaller than the one above, designed only for a 6 by 4 foot table at the standard AE scale. It fits into this space by omitting the opposing forces at the eastern end of the line (French XI and II Cavalry Corps; Coalition 4th column). It is fine for one or two players a side.

This scenario covers the advance on Leipzig from the North by Blucher’s army. It has a small number of units and is well suited as an introduction to Absolute Emperor.

A note about ground scale

Lasalle does not provide a fixed ground scale, but Sam Mustafa mentions in the explanatory notes that 3 Base Widths are roughly equivalent to 100 yards. While strict application of ground, figure and time scales doesn’t generally feature in Sam’s rules, I do find a ground scale useful when starting to write a historical scenario. I have therefore taken the scale to be 1BW to 33 yards. This means a standard 24 x 36 BW table represents an area roughly 800 yards by 1200 yards.

Lasalle scenario 1. The Battle of Leipzig:
Markkleeberg, 16 October 1813: Prussians and Russians versus French and Poles

We played this scenario in our first face to face game after lockdown and we greatly enjoyed it. It is reported in my blog post here. After our game I tweaked the scenario a little bit, by removing the sudden death victory conditions. In our play through, the Allied player chose to go for the sudden death route to victory and completely ignored the village. This gave a great game but it didn’t feel much like the actual engagement, where Markkleeberg was the focus of much of the battle.

This scenario concerns a part of the combat between Davout and Rosenberg on the day before the battle of Eckmühl. The whole combat is covered in the Laichling scenario for Blücher, attached below, while this game focuses on St Hilaire and Deroi’s attacks on the hilltop position that anchored the Austrian left wing.

This scenario concerns the fight for St Amand la Haye during the battle of Ligny, Napoleon’s final battlefield victory. I have uploaded it before playtesting so can’t vouch for balance yet. However I am hopeful as the points totals fit the standard ‘weighted’ scenarios in the rulebook almost exactly.

Our group has played some great games using Honour Games' Blucher rules. Like so many sets by Sam Mustafa, they are deceptively simple: even small rules elements can have an important effect on play.
I produced the attached prompt sheet to help our new players get into the rules as quickly as possible. The notes on it are not immediately visible in the quick reference sheets in the rulebook. When we play with 15mm figures we use 80mm-wide units and a 1BW to 3" playing scale. With 6mm figures we use 60mm-wide units and 1BW is 2”.

Blucher scenario 1. The Danube Valley, 21 April 1809: the combat at Laichling

This scenario for two players covers the confrontation between Davout's Immortals and Rosenberg's IV Austrian Corps on the day before the battle of Eckmühl.

This scenario is relatively small for Blucher and plays out in two to three hours. The challenge for the Prussians is to keep up the pressure on the French left. The French should try to keep reserves to hand to regain lost real estate before the Prussians dig in. The French player should not take risks with his resources: however tempting, he is better advised to keep his reserves in check rather than go looking for trouble in the Prussian lines. Aggressive cavalry commanders should beware!

This is a scenario for Blücher using the small scale in the rule book. I wrote two blog posts about it, one on planning the scenario and one battle report. Small numbers of high quality French Guards take on greater numbers of Russians and Prussians. A chance to get stuck in with the Old Guard for once.

This is the Blucher version of the afternoon fight on the first day of Leipzig. For over 20 years, I have used the Leipzig order of battle as a guide for steadily growing my 15mm Napoleonic armies, first for Napoleon’s Battles and now for Blucher. Having recently completed the French Allied units for Macdonald’s XI Corps, I now have figures for every brigade that was present on the Southern Front on Day 1.. I hope to run it as a multiplayer game during 2022.

This is the order of battle and reinforcement schedule we used for our Blücher refight of Waterloo, described In my blog posts on planning  and playing the game. The starting point for the Unit strengths are Sam Mustafa's 100 Days cards.
I did not produce my own map at the time, so don't have one to share I'm afraid. I based the measurements (at 1BW to 300 yards) on the Waterloo Companion by Adkin.p

This is the Order of Battle we used for our Ligny scenario, using Sam Mustafa’s 100 Days cards and various makers’ soft plastic 1/72 scale figures.